WELCOME TO BLEEDING YOUR COLORS

I have always had a passion for sports.  Great, one sentence in and I am already writing a cover letter.  I believe that writing, talking, and inspiring discussions about sports is what I was put on this planet to do.  That and slowly depleting the nacho supply and being very bad at running long distances.  People close to me for some reason respect my opinions on sports topics which is more than I can say for how I am respected in other disciplines.  I feel this blog will allow me to share those opinions with a wider audience, or at least the same audience and some poor souls on Google who've never done laundry.

I will watch any sport.  I will talk about any sport.  I may not always have a deep knowledge base but I like to learn.  I'll ask questions when a rule or the result of a play confuses me.  I'll provide explanations when a fellow spectator has similar inquiries.  I'll admit it when I am out of my depth or wrong.  I'll also vehemently argue my points when I know I'm right.  Sometimes I'll just yell for no discernible reason at the TV.  Sports I don't know much about intrigue me just as much as ones I have been watching since infancy.  OK I probably only watched Sesame Street during infancy so let's move that time table to about five.

My fifth year is when my first sports memories were created.  The 1988 World Series and one of the biggest NFL trades ever.   The 1988 World Series featured my beloved Los Angeles Dodgers and the Oakland Athletics.  Let me rephrase.  The 1988 World Series featured my cousin Shane's beloved Los Angeles Dodgers who I watched on TV sparsely because I lived on the East Coast and the only games we consistently got were Red Sox, Yankees, and the Braves on TBS and the Oakland Athletics.  I can remember lying on my floor watching the game and falling in and out of sleep.  Five year old me doesn't differ in that regard from thirty year old me as I still have problems staying awake while horizontal.  I woke up just to see the Dodgers' hopes of victory on the brink as Mike Davis and his below the Mendoza line batting average stepping to the plate.  The rest is history.
The second and less momentous of my 1988 was actually not even in 1988.  It was the trade of Eric Dickerson from the Los Angeles Rams to the Indianapolis Colts the year prior.  So why am I a Colts fan in New England subject to ridicule and torment?  Eric Dickerson and his goggles.  Not his college exploits.  Not his 2105 yard season in 1984.  Goggles.  Fucking goggles.  My loyalty has never wavered though. 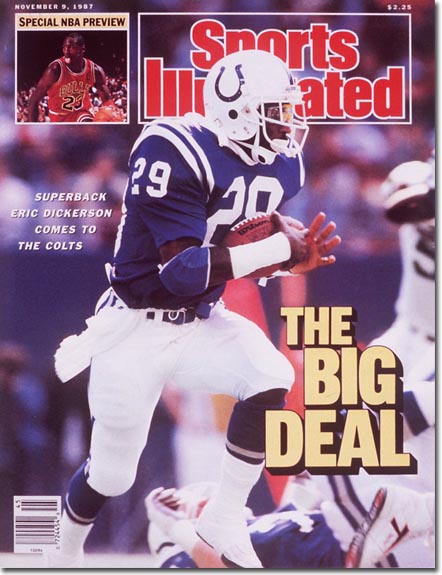 Reminiscence time over.  My goal over the coming years is to turn this into a valuable outlet and creative resource for myself and others.  There are plans for podcasts (yes, plural!) and videos as well as hopefully more original content such as game reports and fantasy sports strategies and tips.  This site is just in its infancy now but I'll surely be watching more than just Sesame Street.